*This is a departure from my typical culinary content, but I hope you can appreciate a brief personal reflection during a politically-challenging time in America.

It has been one week since the March on Washington but it has felt like an eternity. The days have been filled with breaking headlines, clips of protests, a host of tyrannic executive orders, and threats to the very democracy on which this country has thrived. I’ve yelled, cried, and drank. I’ve called senators and representatives. I’ve joined a local advocacy group. I have also observed a level of anger in myself that I have never had to experience.

I have also had time to process and reflect on last weekend, and I feel ready to share. 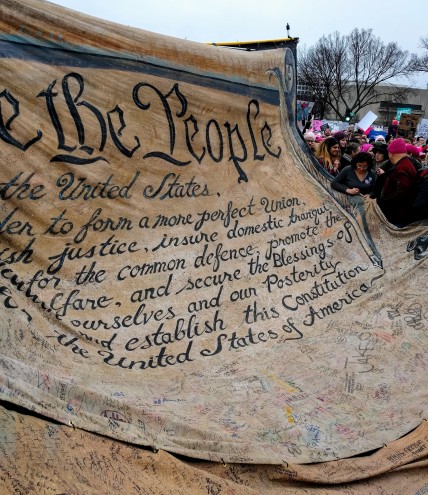 For me, the March provided both validation and momentum. It was a weekend of strength, passion, love, and courage. A reminder that there are so many Americans united against acts of hate and injustice.

It started before I even arrived in Washington. On my plane from Albuquerque I sat next to two women with the same plan. As people boarded the plane there was a noticeable imbalance of female to male passengers. Pink hats and WMW t-shirts were everywhere. There was a photographer on board who couldn’t resist taking photos and interviewing women during the flight. The white, middle-aged man (on the plane for a business trip) sitting in front of me said, “I am so impressed and so proud. Go get ’em, ladies!”

I met my brother and my friend, Beth, in Washington. It was Inauguration Day. With the March the following morning there was a dizzying mix of red Trump baseball hats and pink knitted “pussyhats.” Interactions were generally non-existent between the wearers, and you could cut the tension with a knife.

The next morning we made our way to the Mall. Walking toward the Capital you could feel the energy. A hopeful and contagious energy. There were people of all ages, genders, races, and ethnicities. In the moment it was impossible to appreciate the magnitude of it all.

Standing not too far from the stage, the Mall was crowded, yet peaceful. I never knew a crowd of half-a-million people could be so polite. At the time, we had no idea that the crowd was spilling out of the Mall and into the streets of D.C. Cellphone service was overwhelmed and there was no chance of getting a signal. It allowed us to be present and that was an incredible gift. 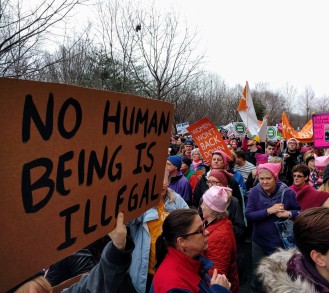 In the thick of it we watched the speakers and performers of the rally, chatted with the people who were invading all personal space, and pointed out some of what may be the wittiest protest signs in history. It reminded me that with activism comes camaraderie, and in turn, with anger comes joy.

The march itself was “cancelled,” but a large group (what I can only estimate to be 50,000+) marched anyway. We snaked through the streets of D.C., past Trump Hotel and the White House, and dispersed somewhere near Dupont Circle. With signs above our heads we yelled chants at the top of our lungs. “My body, my choice!” “Love, not hate, that’s what makes America great.” “Show me what a feminist looks like! This is what a feminist looks like!” Most importantly, we supported each other. 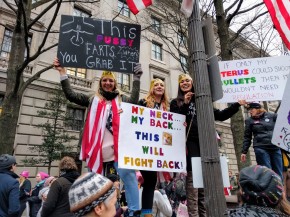 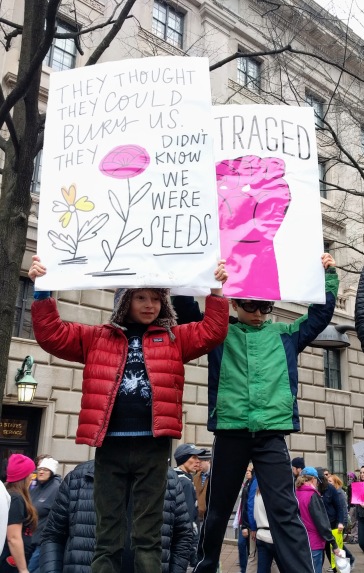 After the march my brother and my friend walked back toward our Air BnB, still stunned by the enormity of the crowd, yet ignorant of all the marches that were occurring around the globe. We found our way into a bar, sat down at a wine barrel-turned-table and ordered Makers & Gingers. On the TVs were news reports pouring in about the numbers of peaceful marchers around the country and the world. It gave me hope. 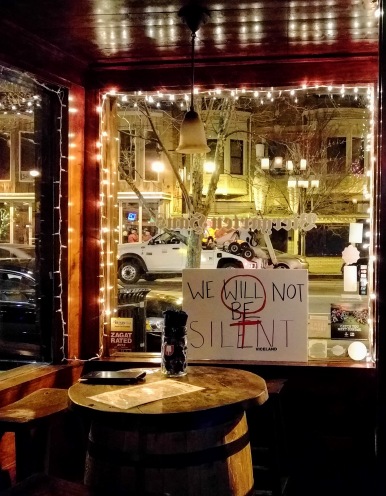 The March was also a humble reminder of my own privilege. I grew up with loving parents who fostered independence from a young age. My mother is a strong, kind, and well-educated woman who modeled a remarkable sense of self-reliance, tenacity, and respect of all people. My father is a commanding force of ideas, intellect, and reason, yet he also conveys compassion, understanding, and humility in all that he does. My brother is a passionate and outspoken young man with a heart of gold and a sweeping appreciation for the talents and sentiments of others. In a world that has begun to normalize “locker room talk,” it feels necessary to say that, in all our years, he has never made a single derogatory remark about women. In fact, he marched right beside me in Washington.

As a child I wanted for nothing. We had a large house, multiple cars, plenty of delicious food, adequate medical care, and a home filled with love. As a white girl in a suburban neighborhood, daily life was not a struggle. I grew up attending a church that supported gay marriage. I participated in after-school activities, sports, and clubs. My parents taught me life skills. I was allowed to make mistakes, to fail, with a cushion of support to catch me. I had positive male and female role models in the forms of teachers, coaches, and family friends, all of whom respected women and minorities. I was encouraged to push boundaries and ask questions. I was damn lucky.

I also grew up among some fierce female friends who have gone on to become doctors, lawyers, professors, entrepreneurs, teachers, and mothers. I can’t take the credit for their strengths and accomplishments, but I will say that my Rolodex is pretty impressive and I’m blessed to have such badass women in my life.

In essence, I am privileged. I haven’t had to fight, I have chosen to fight. And that is privilege at its core.

As a white female I have benefited from a political and social system that treats me with more respect than women of color or other racial, ethnic, and religious minorities. My outrage was sparked when my own rights were threatened, and not in the years past when minorities were fighting for the rights I took for granted. For this I owe a long-overdue apology that will be woefully inadequate. To those with less privilege, I am sorry for not being as good of an advocate as I could have been. I cannot retrace my steps and improve my actions, but I can promise to be a voice from this point forward.

At the March on Washington I was surrounded by those of similar privilege and plenty of those whose lives have been much different than my own. Across all seven continents we saw a mix of genders, races, ethnicities, religions, and beliefs. People with disabilities. People who are rich and poor. Seasoned activists and first-timers. All ages, including grandparents and children. The unemployed to the CEOs. It was a reminder of why this movement is so important. We are only strong if we help those who do not have a voice.

We must come together to take on a force of hate, oppression, and injustice.

We won’t go quietly. We will continue to fight.

This is only the beginning.