My very first blog post was about my love affair with bread. The combination of four simple ingredients to make a myriad of flavors and textures. It’s a pretty incredible process and one that I’ve continued to master over the years. I love bread, carbs, and gluten. And I don’t feel one bit of shame saying it. 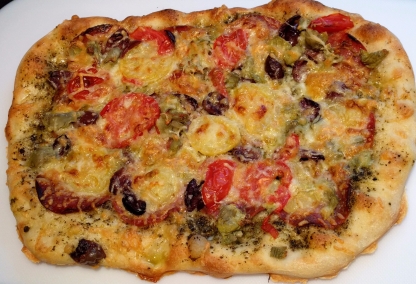 And then there’s pizza. Same ingredients, but a whole different ballgame. I enjoy pizza for what it is – a vessel for creativity in the kitchen. Now I’ve never been an artsy person and my parents probably swallowed a lot of pride putting my elementary school drawings on the fridge (“Well, at least she’s good at math?”). But what limited artist-like traits I possess come out when making pizza.

Pizza dough is a blank canvas. It’s an opportunity to build flavors, textures, and combinations to send your tastebuds on a journey. Personally, I appreciate when a slice has been gently kissed by wood oven flames, has a balanced ratio of crust:sauce:toppings, and provides a gentle crunch-n-chew in the crust. I prefer toppings that aren’t “fussy” and bring their own party to the pizza…like local New Mexico green chiles, fire-roasted, and diced to perfection. Or in the case of this pizza – salumi, locally-grown tomatoes, artichoke hearts, and kalamata olives. 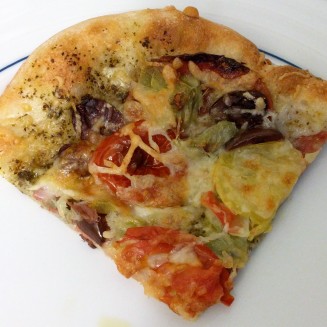 Recently one of Dan’s colleagues, a true Italian who was born and raised in Rome, flicked his nose in the air when Dan mentioned that I make pizza from scratch routinely. Reportedly (as I was not present for this conversation), he was unconvinced that I could replicate anything like the pizza of his childhood…and he’s probably right. But I make a damn good effort to get as close as I can to ‘authentic’ having never been to Italy myself, nor possessing a single chromosome derived from Italian heritage.

As a public service announcement, there is an organization called Associazione Verace Pizza Napoletana that protects the integrity of “true Neopolitan pizza” (akin to the German Reinheitsgebot for beer brewing standards). The AVPN is, more or less, the Italian Pizza Police. And, despite my best efforts, everything I’m about to say is probably condemning me to the Napoli gallows.

So let’s live dangerously, shall we?!

There is a world of debate on the internet about how best to go about replicating the magic of Naples pizza kitchens. Let’s be honest – it’s really hard. Our kitchens weren’t designed to pull this off, so we must improvise. So how do I attempt to make Napoli-style pizza at home, limited by my American kitchen and grocery? Two things: 00 flour and wicked high cooking temperature.

The first component is easily resolved. You need some of this stuff:

Someday I will write an entire post about flour…all the nuances and mysteries (I could put babies to sleep with all the details), but today is simply a crash course in the context of pizza. 00 flour (“doppio zero”) is a very finely ground flour that is used almost exclusively for making pizza in Italy. This stuff is like powder. It’s probably used as a movie prop for lines of cocaine (don’t quote me on that). And that pulverizing mill process means that it requires less water to make a dough, so you’ll need to do some adjusting to get the right ratio in yours. Also, the protein content in 00 flour is slightly higher than your all-purpose flour that is an American kitchen staple (~12.5% vs ~11.7%), which means more intense gluten development and a fun “window pane” test to help you identify when it’s ready. Developed gluten = better chew, and that’s a beautiful thing.

The rest of the process is a matter of patience and practice. A recipe can say “knead 3 to 4 minutes” but that’s just a ballpark. It could be 2 minutes, it could be 10. Pizza dough, like any bread dough, is a feeling. Hence, the artform. 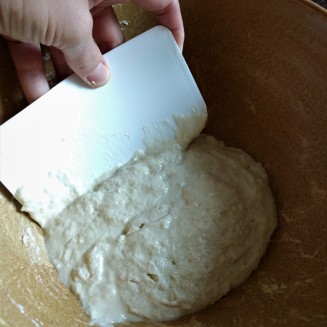 There is not magic number of kneads, amount of time, or visual identifiers that can peg a dough for readiness. First-timers will probably be annoyed to hear that learning the feel of a finished dough takes time, but once you learn it, you’ll perpetuate the same frustrating advice. See that white scraper thing above? It’s a great tool to start the kneading process when the dough is wet and prevent overworking – it’s simple, plastic, flexible, and costs a few bucks from KAF.

There is plenty of hope for newbies though, as the window pane test is as good as any tool when you’re starting out. After kneading by hand for several minutes, stretch the dough gently and hold it up. If it can hold without tearing and you can almost see through it (yep, like a window pane), the gluten is developed enough but not over done. In practical terms: It’s ready.

The second “secret” to awesome pizza is cooking at a temperature higher than any conventional home oven can achieve. In Italy that means wood-fire ovens that reach temperatures of over 1000 degrees. So what do you do when the home designer that built your 1951 ranch home didn’t consider your 2017 need for a wood-fire oven with proper ventilation? Use a pizza stone (or the latest trendy kitchen device: baking steel) and crank your oven to 500 degrees. This may void your oven’s warranty (don’t say I didn’t warn you). Oh, and keep your fire extinguisher handy.

Similar to baking bread, the initial “spring” and sear of the hot stone is key. Slowly cooking a pizza leads to soft, soggy, and underdone dough. So pre-heat that oven and slide the pizza dough onto the stone or steel. A peel is ideal, but I don’t have one. So I have perfected the back-of-a-sheet-pan slide technique that works like a charm, though took much practice. Do not use parchment paper at this temperature – it has a flash point of ~450 degrees (see fire extinguisher comment above).

Another challenge with the pizza stone approach is that the bottom of the crust browns and crisps before the top gets any color. If you’re feeling adventurous, you can switch the oven to Broil for the last 1-2 minutes of bake time to balance it out. Just remember that any time you use the broiler, watch it like a hawk. Things go from beautiful to burned within seconds. 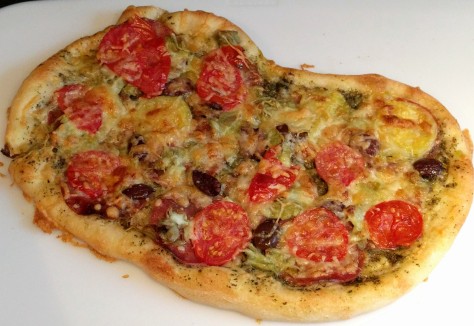 The rest of pizza-making is creativity. Playing with combinations of sauces, cheeses, and toppings. I’m not here to judge what you put on your pizza…but I will anyway. Here are my thoughts on toppings:

Oh, and for what it’s worth, Dan’s Roman friend thinks my pizza is awesome. Count it!

Carolyn’s Favorite Red Sauce
(Not claiming to be at all authentic, but it is delicious)

One thought on “The Art of Pizza”