When it comes to desserts, I prefer recipes that are utterly complicated. Weird, I know.

But there are some nights that I want chocolate and, to quote Veruca Salt, I want it now!

Lava cakes are one of the best kept secrets of any home baker. They look like they have taken hours of work, tons of ingredients, and complex techniques. But they don’t.

Not long ago I taught my former roommate (a guy whose livelihood depends on the microwave) to whip these up for a girl he was trying to woo. He got it on the first try. Oh and he got the girl too!

Break up your chocolate and throw it into a microwave-safe bowl with the butter. Microwave on high for 30 seconds, take it out and stir, then repeat until it looks like this: 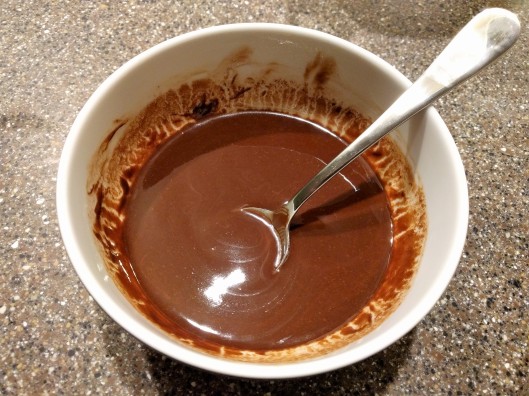 Resist the urge to eat a spoonful and add the powdered sugar. Whisk it in until it’s a uniform color. 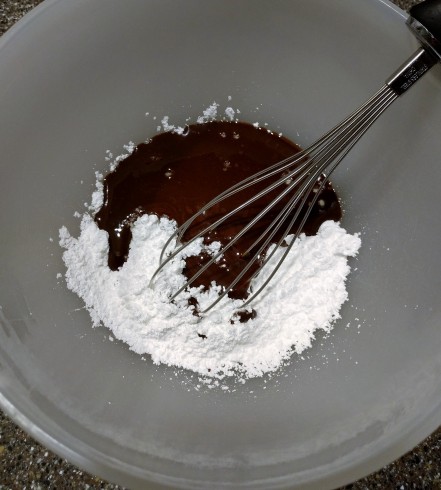 Then add the eggs and egg yolks and whisk them in. I prefer to beat them in a coffee mug beforehand to make it easier to incorporate. Add the flour and whisk until the batter is a uniform dark color again.

Up to this point you will have a classic chocolate lava cake. No bells or whistles.
Enter my secret weapon.

This stuff is a game changer. Honestly you can add any flavoring to your batter and the experimentation is half of the fun. Try vanilla, rum flavoring, bourbon, Cointreau (orange), Kahlua (coffee),  whatever you fancy. Add about 1/2 teaspoon and mix it in.

Now to prepare the ramekins. The most harrowing moment of lava cakes is turning them out onto a plate. If you butter your ramekins adequately, you won’t even break a sweat.

Pro tip: Butter the crap out of your ramekins! “But I always use cooking spray for my pans and it’s totally fine.” No. Use butter – a lot of it. Don’t hold back. I’ve found that it’s easiest to use a sandwich bag for this (yes, like going-for-a-walk-with-your-dog style) to get good coverage on the ramekins and keep your hands completely clean. Magic!

Bake for 13 minutes (no more, no less) in a 425° oven. They are done if the edge is firm and the center is squishy – technical terms, I assure you. Pull them out of the oven and let them sit for a minute. Then run a butter knife around the edge.

Now for the magic inversion: Grab a small plate and cover the top of the ramekin (this will be the bottom of the cake). Flip it over and gently lift the ramekin. And for goodness sake, use potholders and don’t burn yourself! 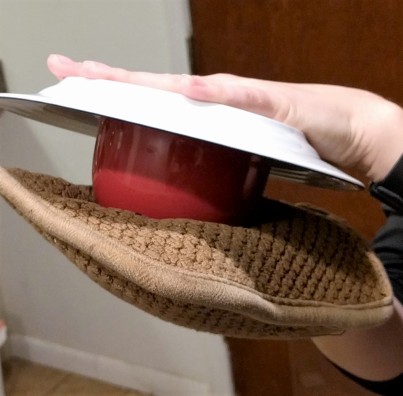 Now dust with some powered sugar, add a scoop of ice cream, and voila!

See? That was a piece of cake…err, easy as pie…. Why are all idioms food-related? Weird.

What are you waiting for? Stop reading…Get a spoon!

*Bakers brand chocolate used to come in 1 oz squares. The newer packaging is slightly different where 1 “old” square = 4 new pieces. Make sure to read the box to get the correct measurements.

Bread is beautiful. It is so simple, yet incredibly complex. Four ingredients can come together in a thousand different ways. Making bread is every bit science as it is art.

For me, bread started it all. So it is only fitting that it is also the start of this blog.

Fresh Beginnings:
If you would have asked me ten years ago how to bake bread I would have little knowledge to offer. I was a college student with a small budget, limited time, and a definitive lack of culinary prowess. I shopped the clearance shelves at the grocery store and concocted weird recipes to satiate my basic nutritional needs. This included day-old bread from the bakery. Less than 24 hours out of the oven a gorgeous crusty baguette or a soft seeded loaf would be cast aside and slapped with a discount sticker (the dunce hat of the bakery world).

I considered myself a rescuer of all things gluten and found ways to turn even the gnarliest looking loaf into something delicious (French Toast, bread pudding, breakfast casserole, croutons…you get the idea). Heck, I considered it a challenge. And I LOVE a good challenge.

I met my (future) husband, Dan, in 2008. There’s a long story about an epic snowstorm, a Mustang, and the Super Bowl, but I’ll spare you those details. Eventually we moved in together when we were both graduate students. Grad school meant working long hours for very little money – supposedly for the love of science (at least that’s what we told ourselves). It didn’t take him long to discover my love of a good deal and a good challenge. So he dared me to make bread.

As in, that stuff that makes the grocery store smell so good. The magical loaves that I could only assume were formed by the hands of baking elves and other wizardy.

He wants me to become a wizard.

“Ok, Carolyn, you can do this.” I told myself with clueless optimism. It was time for research.

I started where I always do: Google. What did people do before the Goog? “Go the library, duh” says my librarian mother (“Touche, mom”). Quickly I was down the rabbit hole reading about yeast strains, baker’s math, and sourdough starters dating to the mid-1500s. I was in over my head.

But then I came across an article by Ken Forkish. I had no idea who he was at the time and it would be several years before he would publish my favorite book on breadmaking. His writing spoke to me. He explained everything simply, elegantly, and enthusiastically. He explained that bread is only as intimidating as you make it. Humans have been doing this for hundreds of years – you can too. Cheers, Ken.

From Frisbees to Boules

My first attempt at bread was one for the record books. Dan and I still joke about that hard, flat disc. It went into the oven with such potential and love behind it, only to come out as a laughable, flavorless Frisbee.

I am a scientist at my core. I measured everything…twice. I read the directions…thrice. I double-checked my work, appropriately distinguished between volume and weight, adjusted bake time to account for our oven’s uneven heating, and computed Vegas odds of success vs failure.

So how could I have possibly screwed this up?

Well, I wrongly assumed that baking bread was simply science.

I failed to acknowledge the presence of the Bread Gods. The ones who whisper in your ear when the dough is perfectly kneaded, the ones who guide your hands to form a flawless round, the ones who watch over your bread in the oven when you walk away to practice tricks with your dog. I did not yet appreciate the zen of bread.

Over months I made loaves that were variations of terrible: flat, “ballooning,” overbaked, underbaked, overworked, full of holes, you name it.

Forgot the salt? Yep. Killed the yeast? Of course. Burned the crust? Let’s just say more than once.

There were a lot of bad batches (translation: a lot of homemade croutons!)
But I got there.
And it was a damn good challenge.

During this venture I learned a lot of things about baking, but also about myself. Regarding the latter, I’m annoyingly perfectionistic. I hate screwing up but I can adapt quickly and problem-solve in a heartbeat. I’m not patient (surprise!). Baking relaxes me. Oh and I really, really, really, love sourdough (the tangier, puckerier, sourer…yep, I’m making up words…the better).

I now make bread several times per month with old and new recipes. I’ve developed friendships of recipe exchanges with fellow breadbakers. I even attended a three-day conference about breadbaking (more on that later – it was incredible!). I love the versatility of four ingredients – the science and the art coming together – and the end result of a crusty, golden boule. It’s truly a love story without the bizarre photos of Fabio. Plus nothing beats the smell of fresh bread in the oven! Mmmmmm…

Learning to make bread teaches patience, vigilance, and humility. It’s a lesson in failure, resilience, and self-examination. I challenge you to try it. Like me, you may fail the first time. When/if you do, dust yourself off (literally and figuratively) and do it again.

You’ll love the smell of victory from the oven.

I can’t promise that this recipe is fool-proof, but I can assure you it’s the easiest place to start. Boule is French for ‘ball’ and reflects the shape of the dough as a round loaf. Recipe yields 2 small rounds.